We have three rules for successful third party politics in the U.S. A party that follows all three has a chance. A party that breaks one of them is doomed to irrelevance.

Rule 1: A successful third party must be moderate enough to win somewhere.

Rule 3: A third party must have a base of voters/activists that is indifferent to the difference between the Democrats and Republicans.

As long as we view politics in terms of a left-right political spectrum, these rules contradict one another! A centrist party can obey Rules 1 and 3 but breaks Rule 2. A semi-radical conservative or liberal party violates Rule 3. An extremely radical liberal or conservative party can fulfill Rules 2 and 3 while violating Rule 1.

A party can survive with meager success by obeying Rules 2 and 3 while breaking Rule 1. Consider the membership dynamics of a new conservative party. Such a party could be appealing to many activists. However, many of those activists will continue to support the Republicans due to the lesser of two evils dilemma. The activists most likely to join/stay in are those who see little difference between the Democrats and Republicans. Yes, the Democrats are worse (for these activists), but the difference is tiny to one far out on the right fringe. Thus, over time we can expect a party like the Constitution Party to radicalize to the right. The same holds for the Greens, albeit to the left.

The Libertarian Party has also radicalized because of this mechanism, but its radicalism also stems from other factors: its ideological origins in axiomatic philosophy and its membership pledge. In theory a libertarian party could survive closer to the center, because libertarianism is not on the left-right axis. Libertarianism is about politics in more than one dimension. 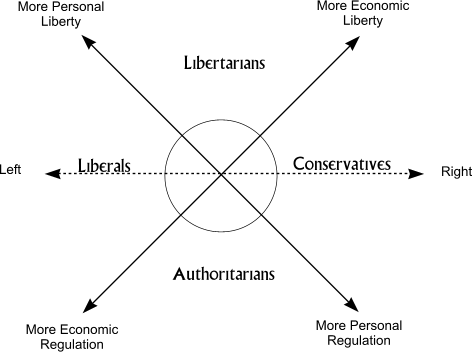 So, according to the previous paragraph, the LP fulfills all three rules. According to my theory, the LP should be much bigger than it is. So, is the theory wrong?

No. The analysis above is incomplete. If we use the Nolan Chart definition of “libertarian,” there are indeed many Americans who qualify as libertarian. The Advocates for Self-Government have demonstrated such through the World’s Smallest Political Quiz and I have verified their results using Quiz2D. However, the Libertarian Party has historically defined the word “libertarian” otherwise. Membership in the LP requires that one “have certified in writing that they oppose the initiation of force to achieve political or social goals.” This can and has been read to mean that one opposes all use of force other than for self defense. This can mean:

Whatever the merits of these positions, they are not moderate; these positions are extremely radical. The LP has historically adopted a mix of extreme liberal and conservative positions. While such a mix may average out to be moderate using one-dimensional politics, few moderates accept such a mix. If we use the Nolan Chart and look at the positions of the Democratic, Republican and Libertarian parties from around the mid 1980s, we get: 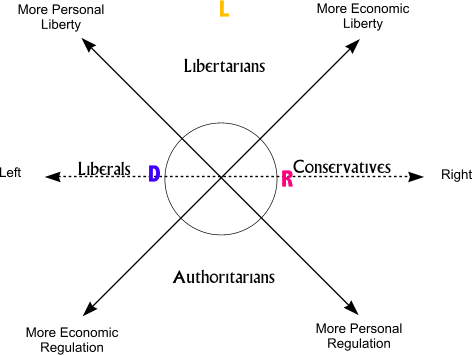 The Libertarian Party was not a moderate party. It was near the extreme top of the Nolan Chart.

That said, the LP has run some moderate candidates at various levels. Some of them have won. (So have some extreme candidates.) One reason why the LP has been able to field moderate, mainstream candidates is that the party does attract a fair number of moderates. The Libertarian octant has room for people close enough to the mainstream to be able win elections. When the LP recruits using the World’s Smallest Political Quiz, it declares many moderately libertarian takers to be “libertarians.” Some of them join the party and become active, because they are otherwise politically homeless. That is, they are dissatisfied by both the Democratic and Republican party messages (Rule 3).

Alas, the purists among the radicals in the party who work diligently to drive out moderates who express their views at conventions. The membership oath gives them a weapon to do so and they use it. For this reason, the Libertarian Party has floundered despite having the potential to become big.

But I got tired of losing so I went all in trying to get the Libertarian Party to move to the sweet spot that it claimed to be at from time to time. I went all in and launched the Libertarian Reform Caucus with help from friends in the Buncombe County LP. We launched a PAC, I wrote a content management system from scratch for voting on new platform ideas, and we got a bunch of like-minded people to show up at the LP convention in Oregon in 2006. By virtue of quirk in they bylaws (which I had to fight to preserve on the bylaws committee) we were able scrap the anarchist platform the Libertarian Party had built over decades.

But we were not able to enact a politically palatable libertarian platform, nor were we able to repeal the membership oath which pledges new members to be irresponsible anarchists whether they realize it at the time or not.

Had we been completely successful and the Neocons stayed in full control of the Republican Party, we might have ended up with a political playing field which looks like this: 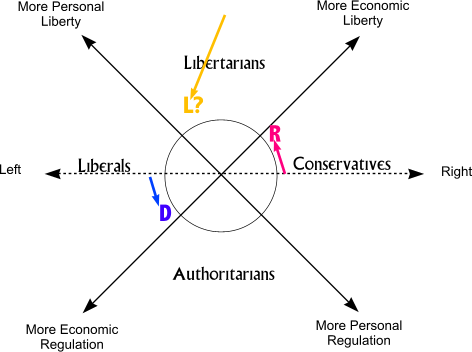 Had this happened the Libertarian Party would have conformed to all three rules and been well on the way to becoming a major party. Instead the radicals maintained parity in the Libertarian Party, and Ron Paul has moved the Republican Party kicking and screaming in the libertarian direction. (Whether his son Rand finishes the job remains to be seen.)

And so the Libertarian Party remains small and I have left the Libertarian Party and allowed myself to contemplate and promote what I truly believe vs. any party line. I still favor more liberty, but I’m game for a bouncy safety trampoline for the poor, strong environmental protections, even a bit of morality enforcement – albeit well below the standards required for true Christians. You will find my current ideology elsewhere on this site (along with variations for those who have differences in values).

Here is the earth shaking bit: based on my rather informal market research, I am now closer to today’s political center than the Libertarian Party would have been had I been more successful. I might well be closer the political center than either of the legacy major parties. If I am correct in my measurements, there is a sweet spot on a different 2D political map that is screaming to be occupied. The market is crying out for a new political party which is bigger then either the Democratic or Republican parties. I’ll show you this market niche in the next chapter. You might be within it yourself.

The Real Sweet Spot for a New Political Party