When we first looked at radical parties, I made the game artificially easy for radical political parties by considering two-way races. The scenario becomes grimmer for a “Party of Principle” when we look at three-way races. Consider a far left Green, a liberal Democrat and a conservative Republican in a three way race in a liberal district. 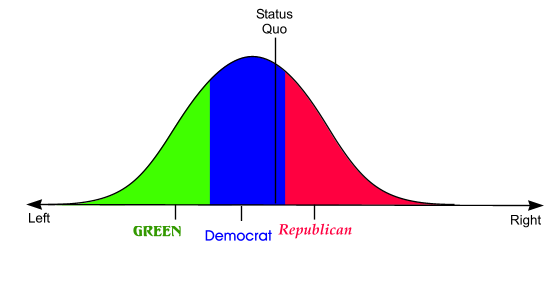 The Green candidate takes away votes from the Democrat, making life easier for the Republican. This leads to four possible scenarios: 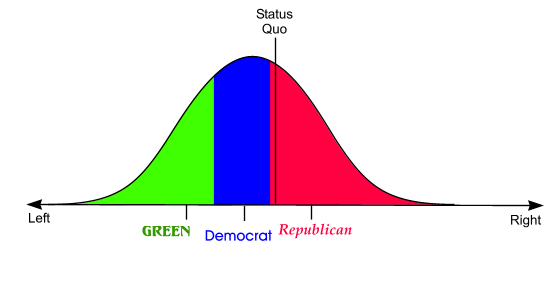 1. Democrat gets squeezed/Republican wins. This has happened. Without Ralph Nader, Al Gore would have been president in 2000. 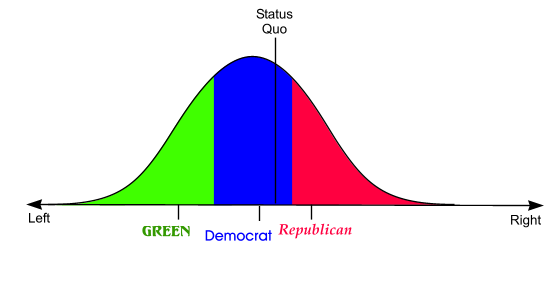 2. Democrat moves to the right to make up for lost Green votes. With a bell shaped vote distribution, there are move votes to be won to the right of the Democrat than the left. 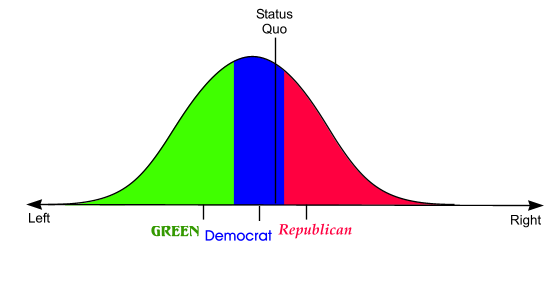 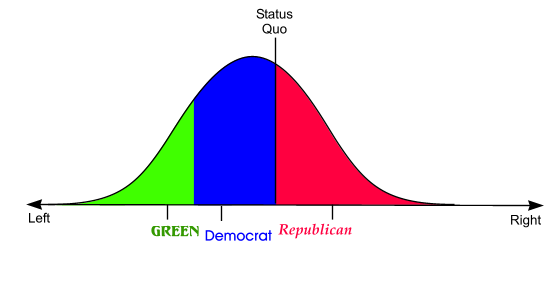 4. Democrat returns to her base. If the Republican is sufficiently conservative, the existence of a Green candidate could cause the Democrat to move to the Left to preserve her base.

For this reason, most ideological greens (and other leftists/near-socialists) generally stay within the Democratic Party fold. The same goes for other left wing parties. Similarly, most conservatives continue to support the Republican Party, even those who are more ideologically attuned to the Constitution Party. In actual practice, the third party candidate gets fewer votes than the above diagrams would indicate. People vote not just for the closest candidate ideologically, but also take into account “winnability.”

The Lesser of Two Evils Dilemma presents the steepest barrier to third party success. This leads us to the third rule for third party politics:

Rule 3: A third party must have a base of voters/activists that is indifferent to the difference between the Democrats and Republicans.

If you don’t see a dime’s worth of difference between the Democrats and Republicans, and you like the Greens, then it is in your interests to support the Green Party. Ditto for the Libertarian or Constitution parties. But who fits this criterion?

And this is why long-running third parties tend to be filled with radicals. Whereas radicalism ensures electoral failure, it does help ensure institutional survival. Radical third parties march on wait for that day when The People wake up, Atlas shrugs, thesis meets anti-thesis, or we discover that Soylent Green is indeed made of people. Until then, the two legacy parties win nearly all the elections and political scientists teach that successful third parties are impossible under our current system.

But success is possible, if you look at the political map in two dimensions.