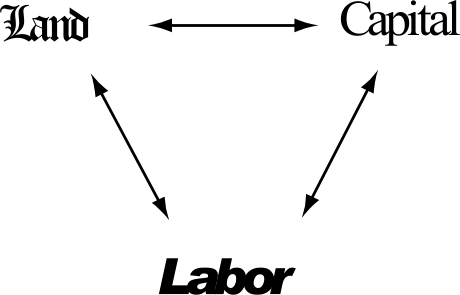 An economy can be broken down into three major components: Land, Labor and Capital. Economists use the term “Land” in a special sense: that which was not created by people. “Land” includes the inherent value of real estate before development adds value; that is, land value before clearing, road building and the placement of buildings. “Land” also includes mineral rights; right-of-ways for railroads, gas pipelines, electric lines, phone lines and cable television; broadcast rights for radio and television; fishing rights; and so forth. Labor is simply value produced by work. Capital is stored wealth that is used to create new wealth: factories, roads, office buildings, trucks, farm machinery and so forth. I will try to capitalize the terms Land, Labor and Capital when I mean specialized economic definitions vs. common-sense usages.

Both capitalists and landlords make money by having money. The more you have to invest, the more income you can receive for the same level of risk. Since rich people can theoretically invest a greater share of their income, they can over time create a greater income stream, thus widening the gap between rich and poor. For this reason, progressives throughout history have called for more of the total share of income to go to Labor vs. the owners of “Land” and Capital, and correctly so.

And here is good news for freedom-lovers: free market capitalism over time increases the quantity of capital. As capital increases, the rate of return on investment decreases; a greater share of the national income goes to laborers. This fact was noted and documented by Adam Smith! When I first read from “The Wealth of Nations” I nearly fell out of my chair when Smith talked about reducing profits and increasing wages through free markets. Adam Smith was an egalitarian! This was the opposite of what I was taught in high school.

The Key to More Equality