Corn based ethanol is questionable. I’d rather see some corn fields turned back into pasture. And the idea of GMO bugs to make cellulosic ethanol frightens me. Think about it: engineered bacteria that can rapidly turn cloth or wood into sugar. Sounds more like an evil KAOS

plot than good environmentalism to me.

But as David Blume points out in Alcohol Can Be a Gas!: Fueling an Ethanol Revolution for the 21st Century

, there are many niche sources of waste sugar and starch that could be fermented into ethanol, sources that don’t require using extra farmland or engineering dangerous superbugs. However, many of these opportunities are small scale, difficult to integrate into our petroleum distribution network.

Fortunately, I see some interesting potential markets for niche ethanol. I believe we can make rich Republicans buy ethanol fuel -- and like it.

The Case for Small Engine Ethanol

I have a good sized lawn. I do not have a truck. This means I have to transport gasoline – a stinky, highly flammable and potentially explosive liquid – by passenger car. I find the arrangement unpleasant.

And if I had an attached garage, I’d find storing gasoline to be likewise unpleasant. Explosive liquids and living quarters are a poor mix.

I used to have a gasoline-powered string trimmer and leaf blower as well. It was very easy to slosh some gasoline on the outside of these tools when fueling. This spilled fuel could then get on the user. Unpleasant and dangerous! 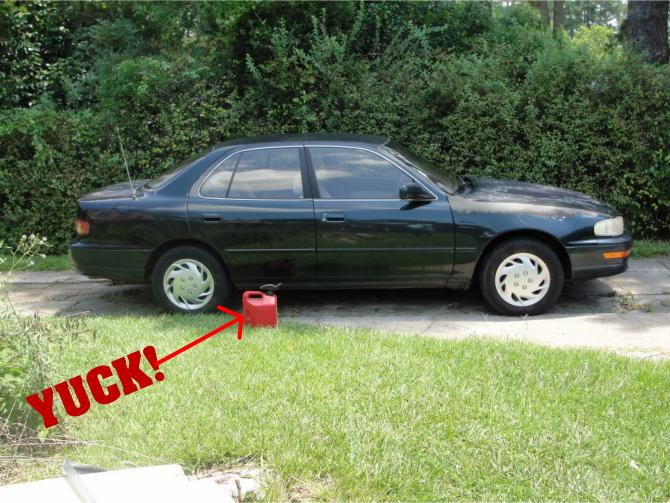 I would happily pay a sizeable premium to fuel my lawn tools with ethanol instead of gasoline. Ethanol is less explosive and less poisonous than gasoline. (Alas, the government mandates adding poison to ethanol in its ongoing War on Unearned Pleasure.) Spill some on the ground and nature will dispose of it properly. If it catches on fire, you can put it out with water.

My situation is not unique. There should be a market for ethanol powered tools based purely on rational self-interest. And there are environmentalists with money as well.

Rich Republicans don’t like air pollution when it’s in their neighborhood either. I’m still hunting down references, but I have reason to believe that cheap ethanol powered engines would burn cleaner than their gasoline powered competitors. (Putting automotive grade pollution control on a lawnmower is quite a price hit.)

Designing a complete engine to optimally burn ethanol is no small task. But modifying existing equipment is a time-honored hobby industry. Upgrading a lawnmower engine to burn E90 is bound to be easier than the mods that teenage hot rodders have been doing for generations. There are market opportunities for both modified lawn equipment and the parts needed to make the mods. Capital required is not astronomical.

This market may not last. With lithium batteries, portable electric string trimmers now have respectable power. There are also battery powered push mowers

with reasonably good reviews. (I haven’t tried one, but I’d like to – just to avoid the vibrations of a one cylinder gasoline engine.)

*Read the fine print at the bottom of the linked page. The "price" at the top factors in claimed fuel savings and tax rebate.

Based on a quick look at the reviews, it appears that battery operated leaf blowers are still primarily for light jobs, so a market for ethanol powered leaf blowers may remain a while. And as for battery powered riding mowers, look at the price*. Yikes! Until someone comes up with a cheaper battery, internal combustion engines still look pretty good.

Gasoline and boats are also a dangerous mixture. Inboard engines are especially problematic. A less explosive fuel would be handy. Being about to put out a fuel fire with water would also be nice. Water is generally available aboard boats.

But for boats we run up against price issues. Unlike small lawnmowers, boats of any significant size or speed use up a lot of fuel. The price difference between gasoline and ethanol becomes a major issue.

We can make up for the price difference somewhat by burning the ethanol more efficiently. Pure ethanol has a higher octane rating than gasoline. This means you can use a higher compression ratio, which leads to higher efficiency. But this runs us into another issue: availability.

If we crank up the compression ratio, then we end up with an engine that cannot burn gasoline. Our boat becomes dependent on a ready supply of nearly pure ethanol. This creates a serious network effect problem. Who wants to travel the Inland Waterway or a large river and find there is no fuel for an empty tank within 30 miles?

I see one possible niche market for ethanol powered boats: small lakes which need to be kept very clean. On such a lake you are never that far from land, so the availability problem goes away. And if everyone on the lake is restricted to electric or ethanol, the odds of someone with spare fuel to share goes way up.

But how many such lakes exist? A quick google search found me lists of reservoirs where no gasoline boats are allowed. But is this from the potential pollution of gasoline or just the disturbance in the waters caused by higher powered boat engines? I leave that question as an exercise for the reader.

Another exercise is figuring out how to keep water out of the fuel. Ethanol absorbs moisture from the air. This is a problem even on land. On water, the problem is even greater.

Alternative fuels and farming go way back. My grandfather loved to tell of the diesel sawmill that he would run off lard. The tractor he still had was an ancient Case, which had two fuels tanks: a big tank for operation which could be filled with “low cost fuel”, and a small starter tank which required gasoline of “at least 60 octane.” (“Low cost fuel” is a direct quote from the manual. I don’t know what it was. Something like kerosene?)

Ethanol might play a role for the modern gentleman farmer. Home brewed ethanol is an ideal fuel for both the eco-hippie organic farmer and the right wing survivalist. Ethanol makes sense as well for the more mainstream gentleman farmer. Particulates from diesel engines may well be dangerous for the brain. What’s the point of moving out to a farm for fresh air and sunshine to then turn around and sit behind a diesel exhaust pipe for hours on end?

Ethanol is not an ideal fuel for the farmer trying to maximize profits, however.

This means the market is rather small. This creates a challenge.

But it may not be an impossible challenge. The nation is littered with shuttered factories that once made farm equipment. The plans for small gentleman-farmer scale spark engine tractors reside within the bowels of the remaining farm equipment makers. There may be some useful tooling lying around as well. Somebody is still making parts for old equipment.

The best opportunity is probably to license a design for a small tractor from one of the now defunct brands and modify it for ethanol burning.

This is still a big undertaking. But if you happen to be the heir to hundreds of millions of dollars and want to do green things…

The modern automobile is the Swiss Army Chainsaw of transportation. It is used for single-person commuting, family transportation, and cargo hauling; highway cruising at 70 mph and creeping down city streets. When I get to writing the series on energy conservation (vs. alternative energy), I will go into detail about the potential energy savings from more specialized vehicles, including “horseless carriages.”

A horseless carriage would be transport designed for city street speeds. This reduces the required engine size enormously. If pure ethanol engines are indeed cleaner than gasoline engines, then one might design them to run on ethanol instead of gasoline, since clean air is a major priority in high population density areas.

I’ll have many more details on this idea in a future chapter.

Biofuels for a Brighter Future

Alternative Energy for Fun and Profit