And those are the idealists!

The pragmatists are more polite, but watch them closely and you'll often find amoral deal-making, cozying up to lobbyists, rampant vote buying, ignoring the Constitution, unjustified pork-barrel projects, and rigging the system to get reelected. And even when they do behave, we still have a problem: mere compromise is not enough. We have exploding deficits, chronic poverty, global warming, disappearing biodiversity, overflowing prisons, broken homes…We need more than half-measures. We could use some radical solutions.

But from which radicals? A quick glance around and you will find:

Dig deeper, however, and you can find interesting counter-offers made by each faction, such as:

Welcome to the world of Holistic Politics, where we cross lines, invade echo chambers, relish irony and unearth forgotten solutions to many of the world’s problems. It starts with mastering multi-dimensional thinking.

Most democracies divide into parties of the Left and Right, each advancing a set of values and deprecating the values of the other side. In between, we have moderates who help provide a mix of each, but such compromises are often ugly and inefficient. Opportunities are overlooked.

The Left and Right are so divided that they cannot even agree on what they are fighting over! According to the Left, the Left-Right spectrum is:

But the Right says its:

Both spectra are partially correct, and partially wrong. We could be charitable and make a spectrum that features the positive goals of each:

We get a better picture by looking in two dimensions:

In the United States, the Left-Right spectrum runs diagonally, from big government egalitarian to smaller government aristocratic. In the middle, we have the worst of both worlds: bigger government and more inequality – so much for “kinder, gentler conservatism.”

The Upper-Left is overlooked, ill-served by either major party. Select the red menu items and you will find mini books on how to fill in the gap. Therein, you will discover:

Cut the subsidies for the rich, and we might not need government provided welfare. But in case we still do, I also have a series of articles on the economics of effective welfare.

In these days of growing population and a fixed-size planet, the grand debate has shifted to preserving nature vs. prosperity.

This is well and good up to a point. Environmental preservation does have a price, and many forms of consumption do hurt the environment. But go too far in either direction and self-contradiction results: a pristine environment is a form of wealth! Once we get past the crisis stage, further improvement to the environment is a luxury. An anti-luxury mentality is thus self-defeating. Many environmentalists try to circumvent this dilemma by magnifying environmental threats in order to stay in crisis mode. They cry “Wolf!” As a result, many non-environmentalists discount legitimate concerns. Not good.

To get to the next level of environmentalism, we need to look in two dimensions. 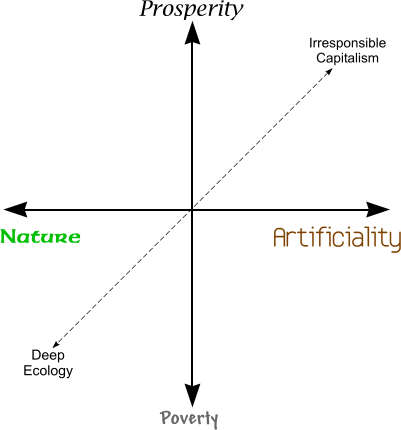 Excellence in environmental preservation requires that we either brainwash half the population into being nature worshippers, or we look for solutions in the upper left quadrant, at ways to boost prosperity while better preserving nature. The green menu items provide the latter options. For example, we can stop global warming while continuing to prosper. Conservatives take note: you can use the climate change issue as a convenient crisis to get rid of the income tax and get something resembling the Fair Tax!

Many in the Religious Right call for harsh laws for immoral behavior. On the other side, liberals call for government endorsement of acts contrary to Biblical Law, and many Objectivists call for the outright renunciation of religion as the key to liberty.

The blue menu items point to ebooks resolving this conflict. Herein, you will learn:

If you love freedom but find libertarianism to be too extreme and/or simplistic, you have come to the right place. Here you will find a much more palatable freedom vision, more practical and more utopian than standard brands of libertarianism.

Granted, when I started this site, I was a libertarian, an active member of the Libertarian Party, and was trying to craft a more politically acceptable version of libertarianism. But as I researched and wrote the materials on this site, I found myself departing more and more from core libertarian dogmas:

These are hard lessons, I know. It took me decades to learn them all. Rand and Rothbard wrote powerful prose, siren songs for those who inherently love liberty. I was beguiled myself for many years, but my love of debate kept me out of the echo chambers, and I slowly learned from my mistakes.

A broader theory of freedom emerges:

Putting it all Together

Under the Synergy menu column you will find article series which impact all four values: liberty, equality, nature, and morality.

Promote Your Page Too

Printer friendly: this sidebar and the header should disapper when printing. Try "print preview" to verify.